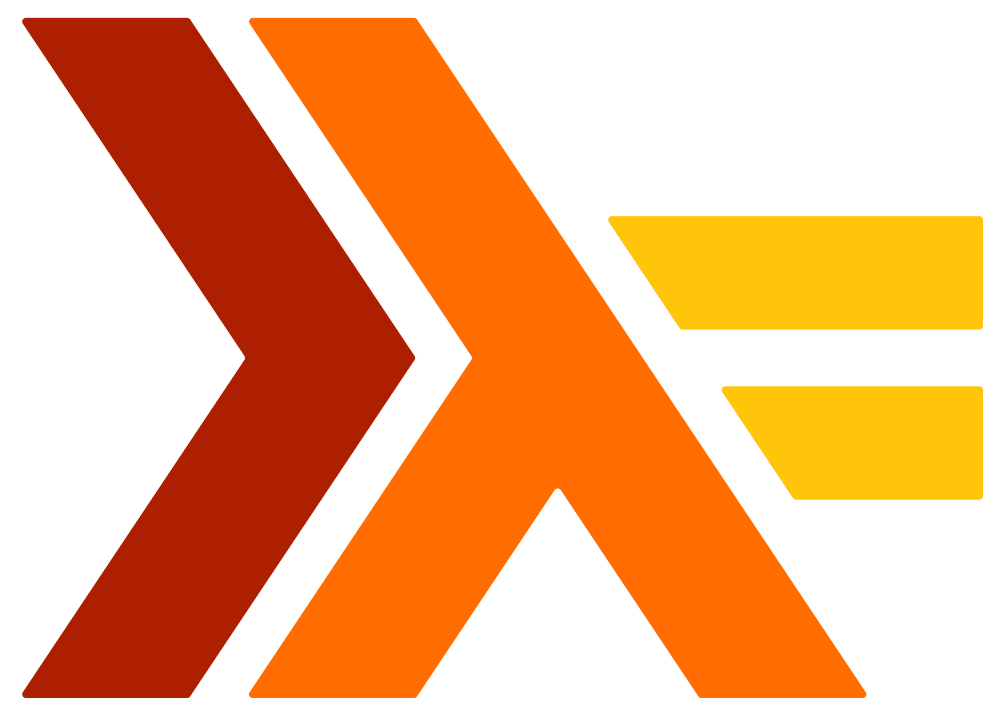 Introduced by Alonzo Church in the 1930s, $\lambda$-calculus can be considered as the smallest computation programming language of the world. Reading through the various tutorials one can find various examples which showcase its universality; addition, conditional operators, equality and inequality and recursion. One thing which always intrigued me is how applicable is $\lambda$-calculus to everyday problems such as finding the set of URLs in a sitemap or a set of alternate language urls? The question is obviously rhetorical since we know that $\lambda$-calculus is Turing complete! Can we model a “modern” problem in terms of $\lambda$-calculus and will such a problem still feel natural? The answer is yes! In this post we are going to apply $\lambda$-calculus in an SEO domain, specifically to construct a Sitemap and to find the hreflang for a language.

Disclaimer to a future math reader! If you are mathsy and you might feel like pulling your hair out after reading this (mathematical loose hand-wavy) document, rather than going on an epic rant about how useless I am please help out! After all I’m not a Mathematician 🙂 but I'd love to learn!

Having defined an expression let us look at some examples:

Notation-wise we will use the following rules:

The set of free variables can be defined recursively:

Similarly, the set of bound variables can be defined recursively:

In $\lambda$-calculus there is one computational rule called $\beta-$reduction: $((\lambda\textit{x}.s)\texttt{t})$ can be reduced to $\textit{s}[\texttt{t}/\textit{x}]$, the result of replacing the arguments $\texttt{t}$ for the formal parameter $\textit{x}$ in $s$. Note: It is assumed that no substitution will mix free and bound identifiers and hence we will omit the discussion of $\alpha$-reduction. Some examples are:

A more complex example would be the following:

On the other end of the spectrum we find expressions that do not have a single reduction sequence. As an example consider

where $n_1\ldots n_{k}$ are the parameters of the lambda functions and $c_1\ldots c_{k}$ are the arguments of the function. Each individual argument $c_{k}$ can be either a name or constant. It can be shown that expressions of this form are deterministic and fully normalised (cannot be reduced further). Specifically, it will take $k$ $\beta-$reductions to normalise the $\lambda$-expression.

Given a $\lambda$-expression of the form

A more complex example would be the following

In general, the generic $\lambda-$expression

can be represented as follows 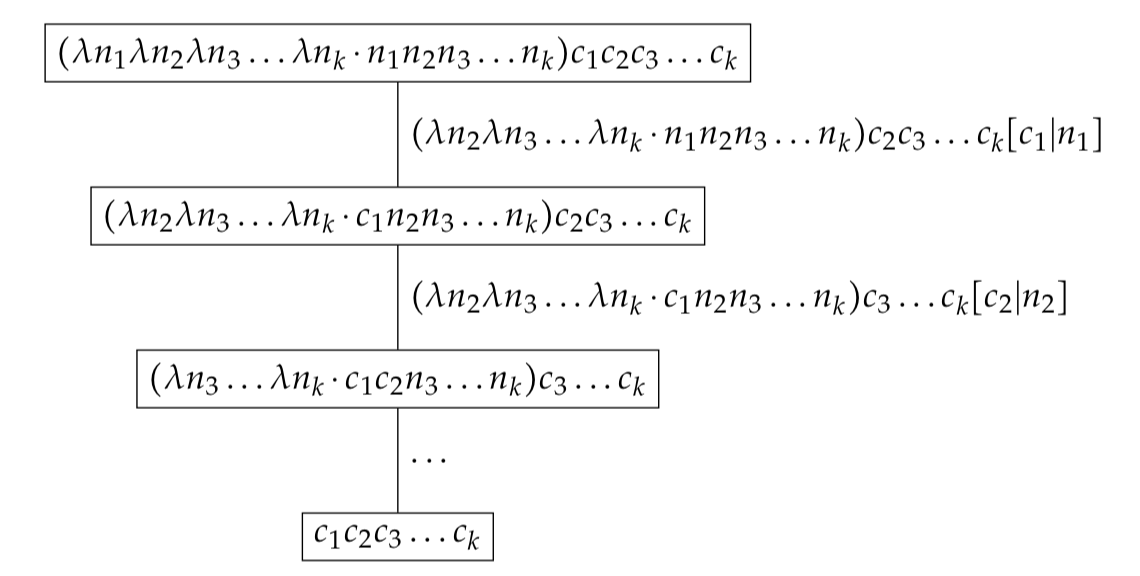 Given that each expression tree has only one reduction sequence to normalisation we will merge all expression trees in a single tree by omitting the context. As an example let us consider the $\lambda-$expression set

The expression set can be represented as

It is important to note that an expression set tree is just a visualisation aide. Mentally, one should always expand each node in the tree to the set of $\lambda-$expressions. At each level the set of $\lambda-$expressions being represented can be found by mapping all descendant leaf-nodes using $\omega(c_1c_2\ldots c_{k})$ defined in the previous section. As an example the root node in the expression set $\lambda \textit{l}.\lambda \textit{s}.\textit{l}\ \textit{s}$ has four descendant leaf nodes

and hence represents the set 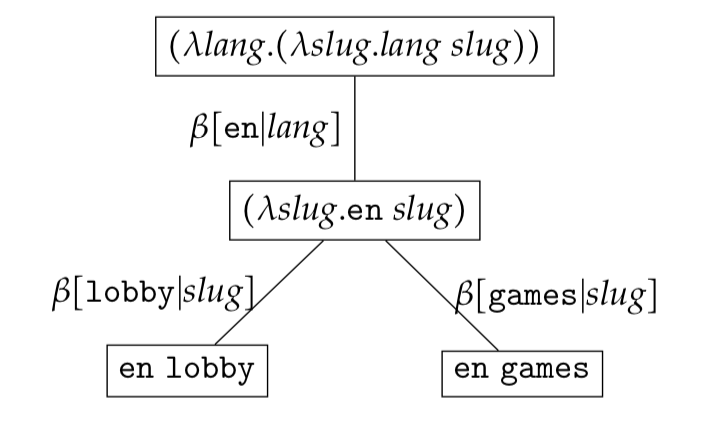 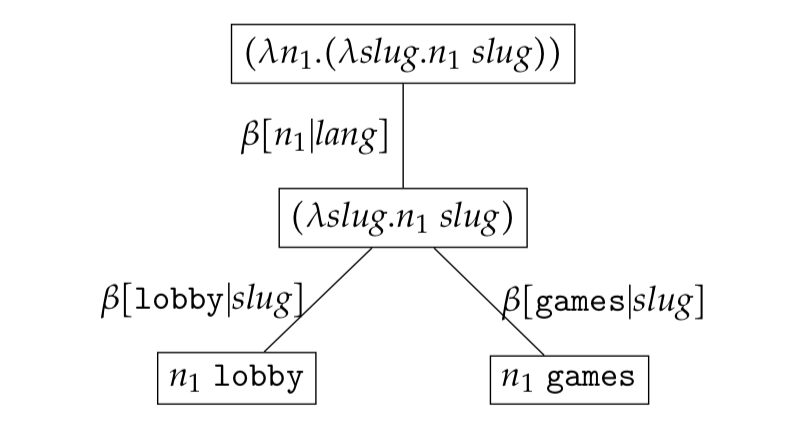 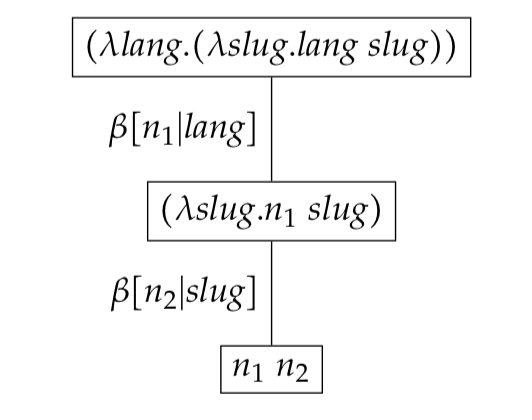 Given a $\lambda-$expression of the form

we can serialise the normalised reduction $c_1\ldots c_{k}$ by means of a bijective function $f$ which takes a context configuration and maps it to a string $s$. The function $f$ has to be bijective, as later on, we will need to deserialise the string back to the context.

One implementation of serialisation function $f$ is to join the context using the / character. As we have two types of variables, free and bound, we need to distinguish between these different types so during deserialisation, the context can be correctly reconstructed. In order to distinguish between free and bound variables we will prefix free variables with the colon prefix.

The normalised context for this expression is

The result of serialising the above expression is

One other implementation of a serialisation function is $f_{int}$ which takes a context and serialises the context into an internationalised string. As an example consider

The context for this expression is

The result of serialising the above expression is

where the constant slots in Finnish is serialised to kolikkopelit.

Deserialisation maps a string representation back to the context.

and reconstructs the original expression using the $\omega$ function

As an example let us match $\lambda l.\texttt{en}$ to itself

In this section we shall look at two search properties: the search identity and freed context identity.

Let’s for instance search for

on the expression set

The normalised reduction for the node with the $\dagger$ symbol is $\texttt{en}\ \texttt{lobby}$. In order to retrieve similar nodes one needs to substitute constants with free variables. Such a substitution marginalises all constant values for the given variable $c_{k}$ making such a variable (in the context) irrelevant to the search. For instance in order to find similar $\texttt{lobby}$ expression trees, we retain the bound $\texttt{lobby}$ constant and replace the $\texttt{en}$ value with the free variable $\ast$. Searching for the expression tree $\psi(\lambda \textit{lang}. (\lambda \textit{slug}. \textit{lang}\ \textit{slug})\ast\ \texttt{lobby})$ will yield

Nothing! Give me Nothing!

As an example, let us consider the $\lambda$-expression

In order to introduce nothing, we will add the constant $\varnothing$ to all type sets

and restrict the configuration $c_1c_2c_3$ to be in the set

$\varnothing$ does not affect $\beta-$reduction, it is after all a constant. As an example let us consider

We will typically omit $\varnothing$ from the expression set for clarity. 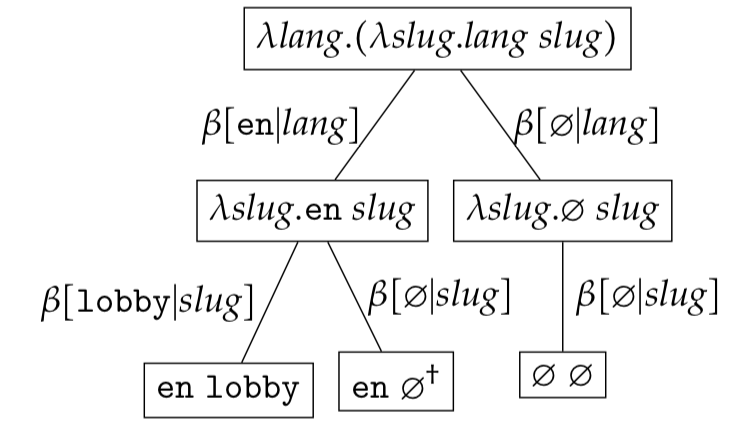 This comes as no surprise due to the search identity! Note that $\psi(\omega(\varnothing\ \texttt{lobby}))$ is not included in $\mathcal{RS}$ since this would violate

In this section we shall discuss how the $\lambda$-calculus can be applied to solve two SEO problems: getting all the paths of the site and getting a path’s alternates in other languages. 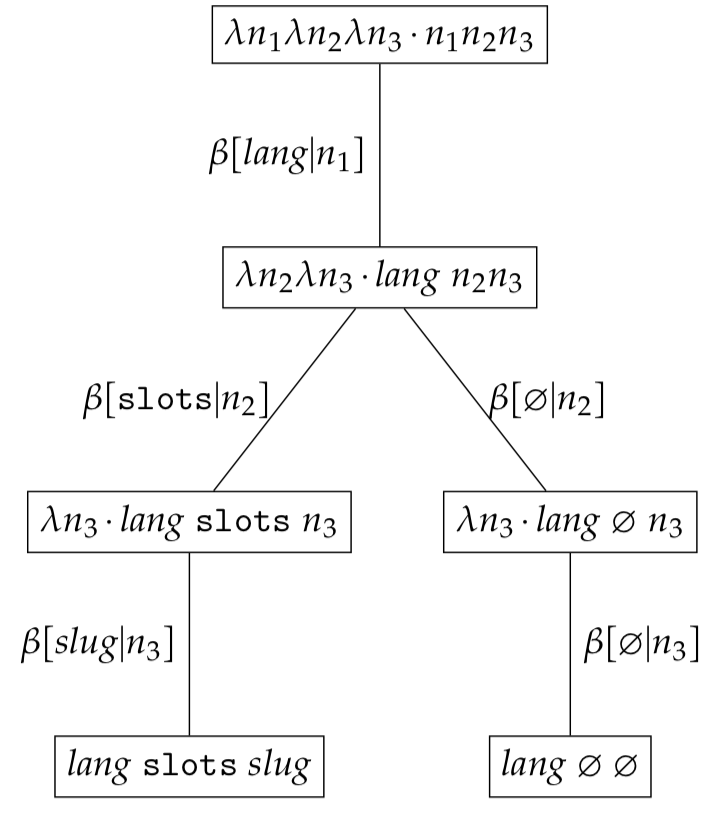 A resolver function $r$ is a function which takes a context $c_{k}$ and returns the set of all possible bound values $\mathcal{C}_{k}$. This is required when the value $c_{k}$ has been marginalised by a free variable.

To convert the partial expression set 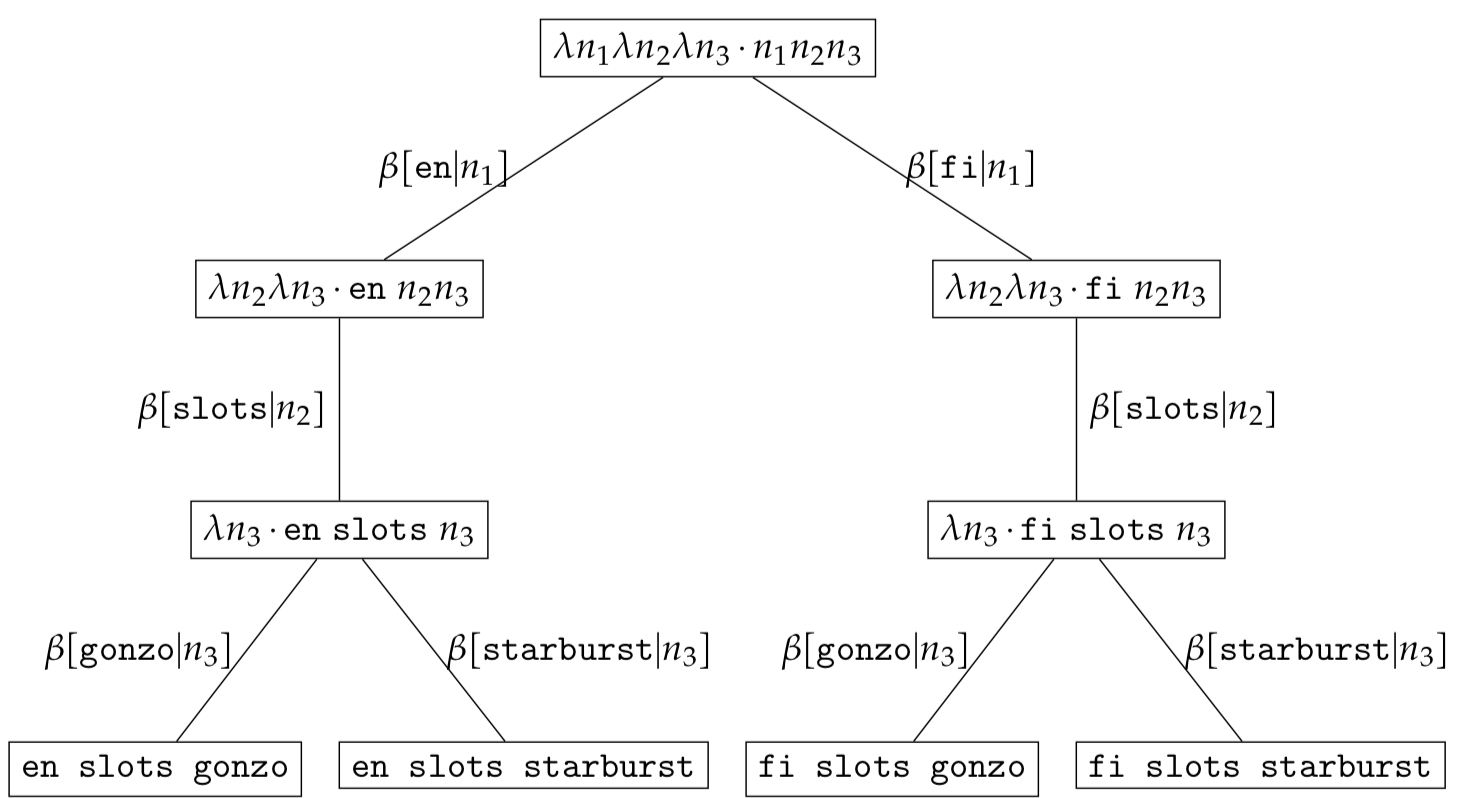 99 Problems! Sitemap and Alternates ain’t one!

Having constructed the bound expression set we will now tackle the problem of serialising the complete sitemap and the problem of finding a list of alternate URLs from any given URL.

Getting all the paths of the site for sitemap

Having constructed the bound expression set we can obtain the set of URLs by passing each normalised expression through an internationalisation serialisation function $f_{int}$. For visualisation purposes, we shall display the serialised form after passing it through the serialisation function handling internationalisation $f_{int}$ below the node. Due to space limitations, we shall omit drawing the $\varnothing$ nodes. 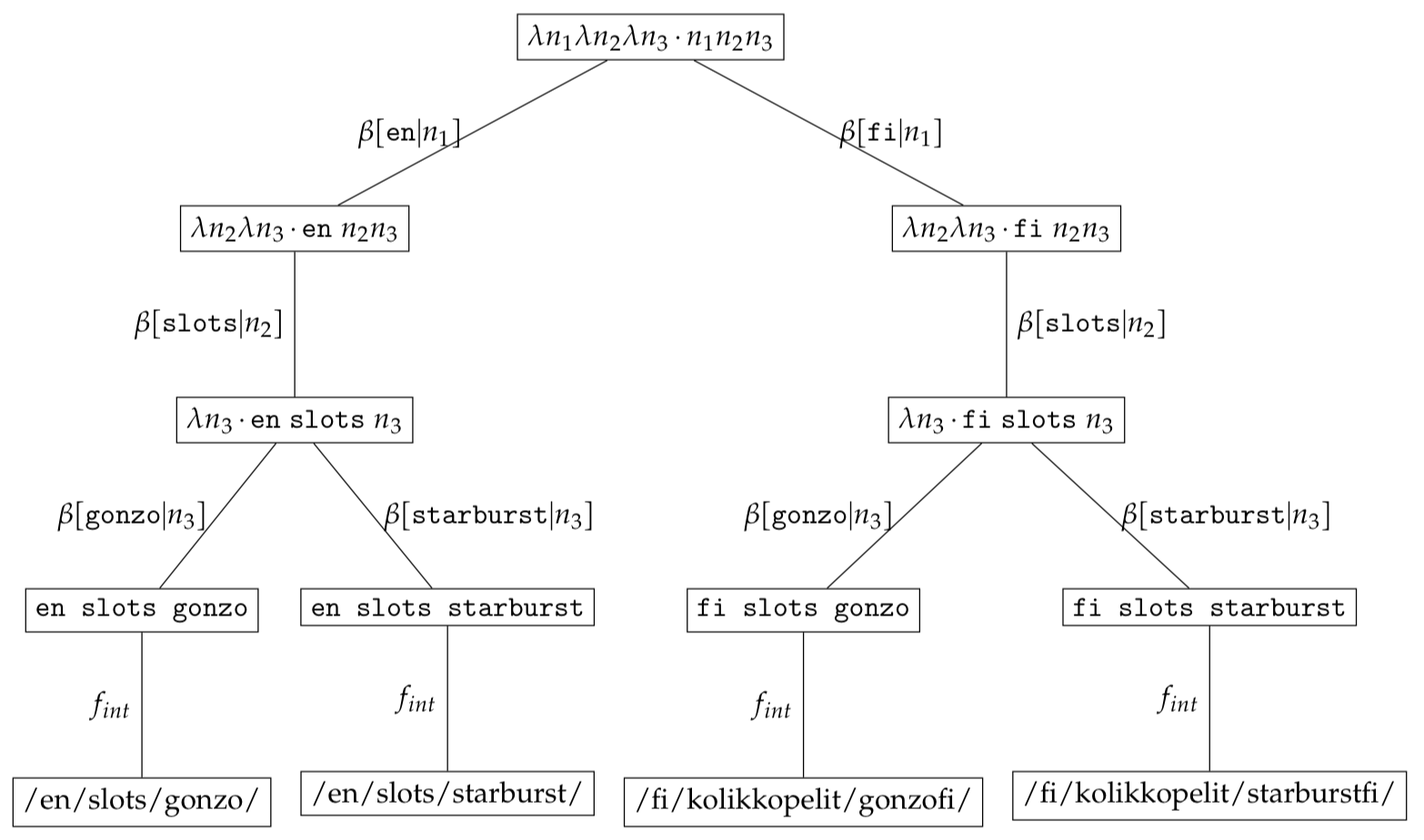 Since some paths might not be desired in the final list of URLs (sitemap) we will filter some deserialised URLs by passing them through a predicate $p$. Such a predicate needs to be based on the value of the variable $c_{k}$ present in the context. As an example the predicate $p(c) \rightarrow c_{1} \ne \texttt{en}$ will filter the serialised set

As an implementation detail the CMS should include a flag on each sitemap and game element to indicate whether such an element is to be included in the sitemap. Such a flag needs to be encoded in a variable $c_{k}$ within the context.

As an example, let us assume that a client requested the page /fi/kolikkopelit/gonzofi/ annotated with $^\dagger$ below. 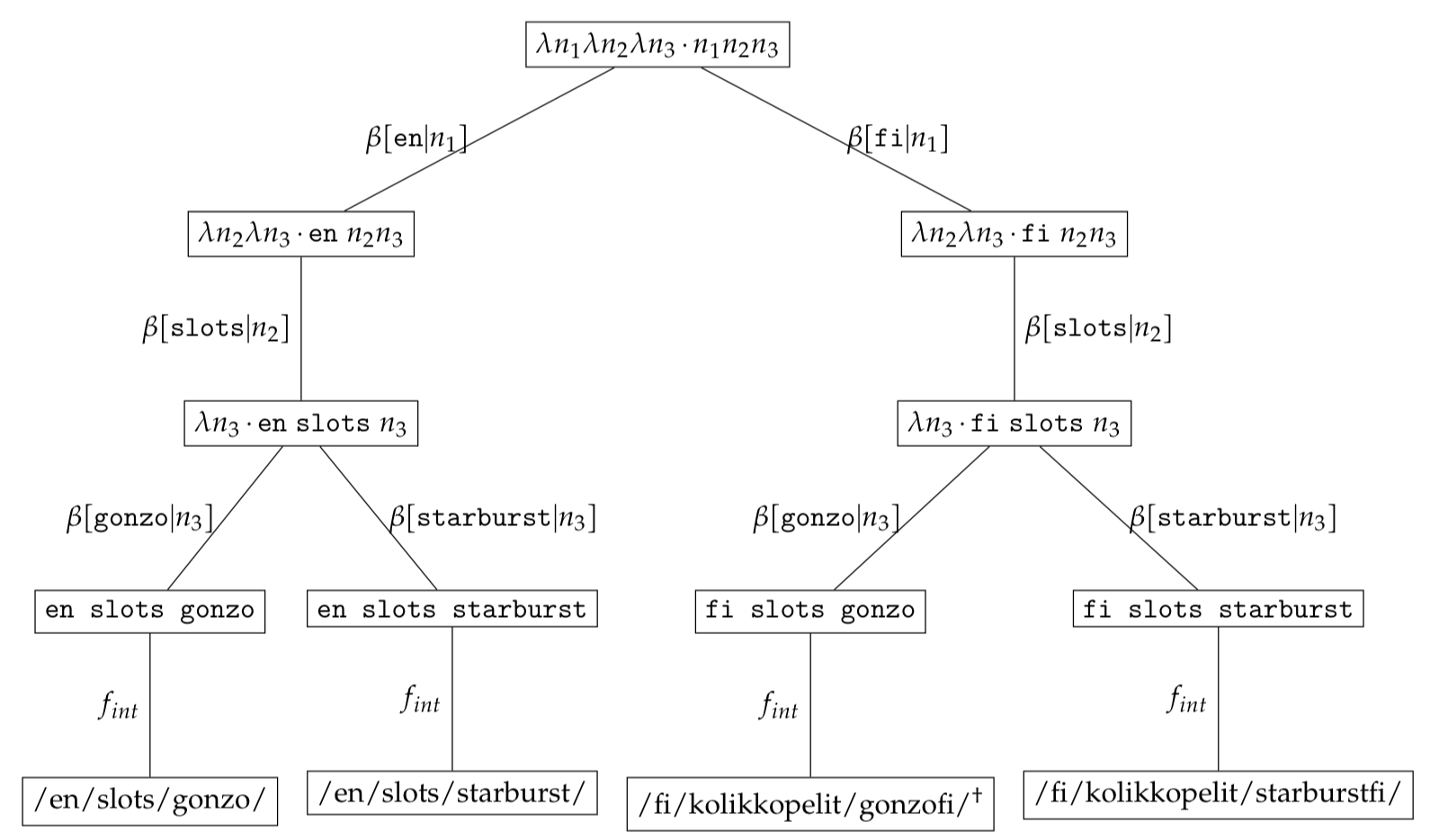