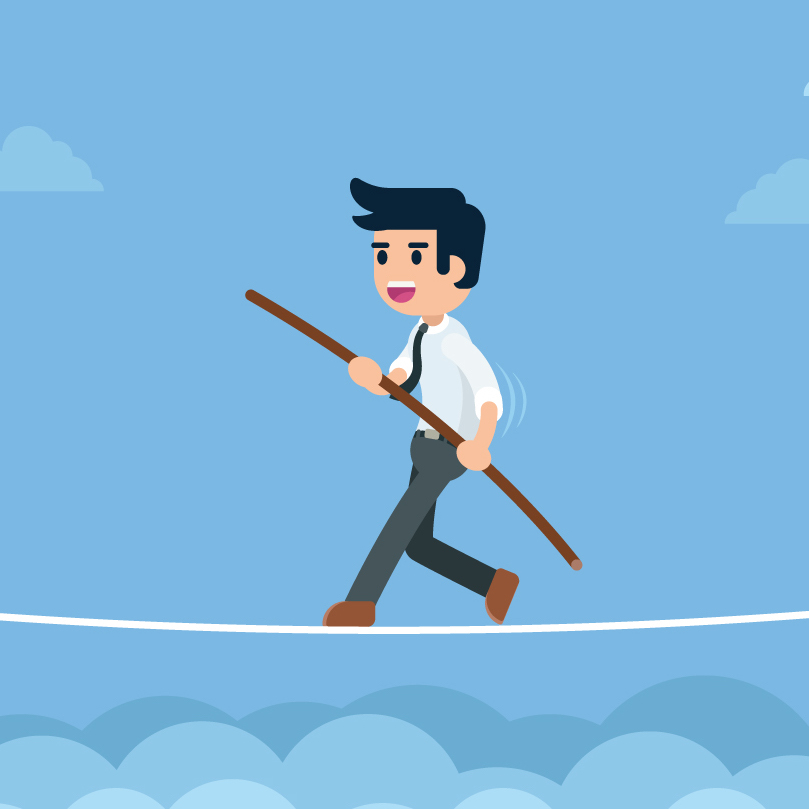 One question which often crops up when mentioning Functional Programming (FP) is “But what’s the point of using FP? Why would I change from an Imperative Programming (IP) paradigm to FP if both solve the same class of problems?”. To the uninitiated FP represents a surface level refactor to use “newer methods” such as map, flatMap and filter with a sprinkle of classes such as Option(al) and Either but obviously this is not the case.

Hopefully by this post I will motivate the move from IP to FP by going through the concept of computational context. To illustrate this concept I will use the Walk the Line example presented in Learn You A Haskell For Greater Good!.

Let’s start by describing the problem.

This example is adapted from Learn You A Haskell For Greater Good!. All credit goes to Miran Lipovača (@bonus500). Thank you for creating such a great and fun book and thank you for introducing me to Haskell. 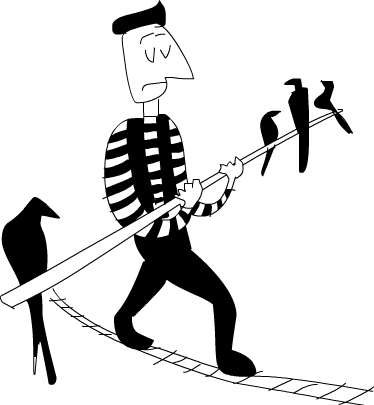 One way of dealing with failure in the imperative toolbox is through exceptions. The Pierre scenario would be implemented as follows:

Let’s first visit a happy Pierre moment; one bird lands on the left

, and four birds land on the right

Can you feel the tension? Just one more bird to tumble Pierre’s hopes and dreams! (which is exactly what we will do!)

As imperative developers this feels normal; we do a couple of operations, sandwich things between try-catch blocks and continue processing (or throw more exceptions). The problem here is that landLeft and landRight are dishonest about their return type in that they do not indicate potential failure. To make matters worse, landLeft and landRight expose a fluent API which suggests that operations can be chained or sequenced again without being clear of potential failures. Using such a “technique” one can only ensure that a function is honest by going through its code. This is definitely unfeasible in large code bases.

Another popular “technique” to deal with failure is by using nulls to capture failure.

This “technique” is even more dishonest than the exception counterpart since it leads to runtime NPE.

The problem here is again dishonesty in the return type. The return type in this case is telling us that we should expect a Pole yet at times we get null. Dealing with nulls through ifs makes our code difficult to read and does not allow us to sequence operations correctly. ifs break the cognitive flow and expose function internals which should not have leaked.

Ok, so we tried with exceptions, then we tried with nulls but we still failed to come to a sensible solution. How about we return the same Pole when the condition is unsuccessful?

Let’s try this out starting with 1 bird on the left and 4 birds on the right and let one more bird land on the right hand side.

Great! We do not get odd exceptions or null pointers so things should be fine! Except that they are not fine. Let’s look at what happens if we chain more operations after Pierre tumbles up in the air.

Operations are still allowed to be sequenced - it’s as though the context of the computation is not carried forward. Pierre is magically back on the tight rope as if he never tumbled. This is clearly incorrect and I’d dare say more dangerous than the other two solutions. Here we have potential data corruption and an error which is very hard to track.

Functional for the win - The Option Context

Let’s now implement Pierre’s scenario using Option to represent the presence or absence of a Pole.

Looking at the return type for landLeft and landRight we can immediately deduce that there could be potential failure; the return type is Option[Pole] indicating that the computation may have a Pole rather than there will always be a Pole. Ok, so we used Option, bravo!

but what’s the big deal? What we gain with Option is a computational context in which a set of operations can be sequenced. To understand the difference let’s sequence the same bird landings and observe what happens

In this case, the value of result is Empty rather than Some(Pole(2, 5)). The Option “remembers” that an operation has failed - pierreOk.landRight(1) - and carries this forward. Once a computation evaluates to an Empty value, all further computations will yield an Empty value. Pretty cool huh? So in the functional equivalent, we gain honesty of types and we also create a safe context in which operations can be sequenced.

In this post we have outlined the journey of Pierre as a tight rope enthusiast and have simulated his scenario using both the imperative and functional paradigm. Through the use of FP we have managed to sequence birds landing safely and to make a more honest API. Hopefully this can motivate some of you to get interested in FP. Stay safe and keep hacking!